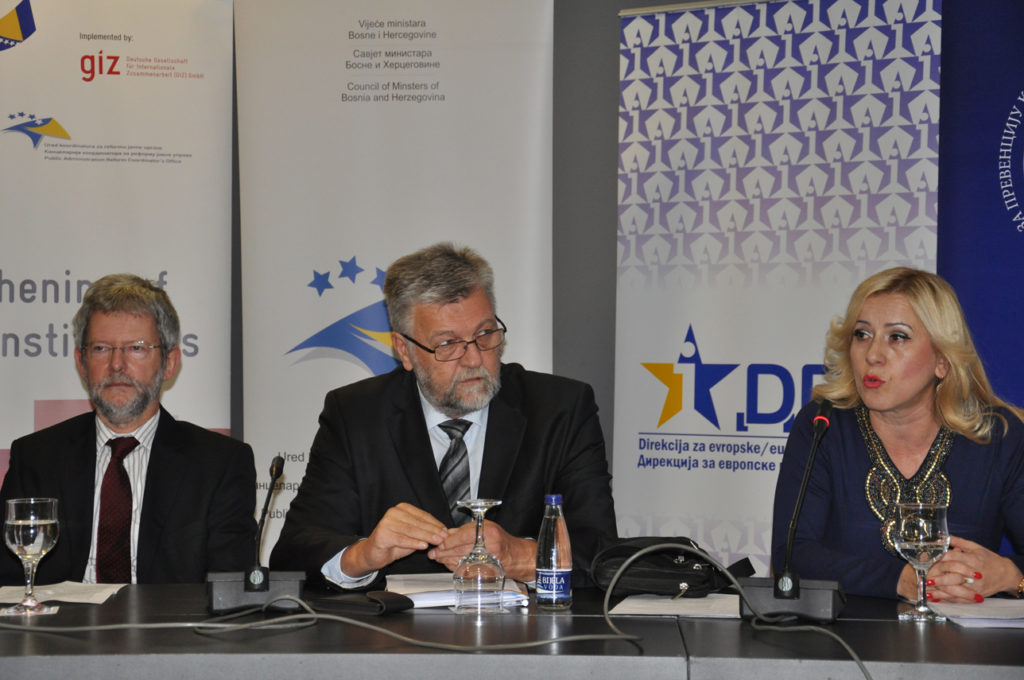 The conference on communication in public administration was held in Sarajevo, 26 October 2016. The conference is part of the Programme for Strengthening of Public Institutions in BiH, which is commissioned by the Government of the Federal Republic of Germany in Bosnia and Herzegovina and implemented by the Deutsche Gesellschaft für Internationale Zusammenarbeit (GIZ). The conference was organized by: Public Administration Reform Coordinator’s Office, Directorate for European Integration of BiH, BiH Agency for Statistics, BiH Agency for the Development of Higher Education and Quality Assurance, Public Information Department of the BiH Council of Ministers, and the BiH Agency for the Prevention of Corruption and Coordination of the Fight against Corruption.

“Without effective internal and external communication, there is no effective public administration that would in the best way respond to the citizens’ needs”, said the Public Administration Reform Coordinator, Dragan Ćuzulan, PhD. He stated that the principles of transparency and public accountability, promoted through the public administration reform and the Open Government Partnership, were just one in a series of reasons making public relations vital for the functioning of all segments of public life and institutions.

The conference was aimed at presenting the documents recently created by representatives of the afore-mentioned institutions, as a part of the Programme for Strengthening of Public Institutions in BiH. The documents relate to the positioning of communications in the public administration and the activities implemented by these institutions in applying a proactive approach in the intuitions’ communication with the public through social media, including the organization of panel discussions for each topic. The initiative for the organization of this conference is also based on the BiH government’s commitment to implement the reforms, such as the public administration reform and combating corruption, as well as on international initiatives such as the Open Government Partnership.

The presentation can be downloaded here: Presentation of the Positioning Document – E. Mujanović and M. Begić (BCS only)

The full document is available here:  Positioning Document on the Strategic Communication in Public Administration  (BCS only)

The need for a better positioning of communications in public administration and the need for a strategic approach to communications were addressed during the discussion by panelists Amela Odobašić, Head of the Public Affairs Department in the Communications Regulatory Agency, and Marija Pejčinović Burić, independent consultant from the Republic of Croatia.

Azra Aličković, Head of the Media and Analysis Unit in the Public Information Service of the BiH Council of Ministers General Secretariat, and Vedrana Faladžić, Senior Expert Associate for Public Relations in the Public Administration Reform Coordinator’s Office, presented the key findings and recommendations from the research on the profile of the public administration communicators.

The presentation is available here: Presentation on the Communicators’ Profile – A. Aličković and V. Faladžić  (BCS only)

The research shows that the job of communicator in public administration is mostly performed by women between 26 and 45 years of age who graduated at the Faculty of Political Sciences. An average communicator has the status of civil servant, rarely holds a managing position, is not a part of the top management in the institution, and has six to ten years of experience in the public relations field. Furthermore, the employees performing communications jobs generally speak English and have an average salary between BAM 1,000 and 1,499. In addition to salary and meal and transport allowance, there are no additional financial benefits from the job.

The full document is available here: Research Results on the Profile of Public Administration Communicators in BiH

The issue of ensuring an adequate status of public administration communicators was addressed during the panel discussion by Mirjana Micevska, Assistant General Secretary and the Head of the Public Information Service of the Council of Ministers of BiH, while the importance of investing in the public relations and the use of budget funds for communication activities was addressed by Dobrila Močević,  Director at Prime Communications.

In the third thematic session, Jesenka Hadžajlija, Head of the Department for Promotion at the Directorate for European Integration, presented the experiences of institutions – members of the inter-institutional working group for communication and knowledge management in the social media communications.

The presentation is available here: Presentation of Experiences in the Social Media Communications – J. Hadžajlija (BCS only)

In continuation of the panel discussion, Amila Opardija, Expert Advisor for Public Relations of the Agency for Identification Documents, Records and Data Exchange presented the experiences of this organisation in communication via social media. The importance of public administration communication via social media was the focus of Ines Bulajić, independent consultant from Sarajevo and Hana Kazazović, blogger and Head of the Online Public Relations at Prime Communications.