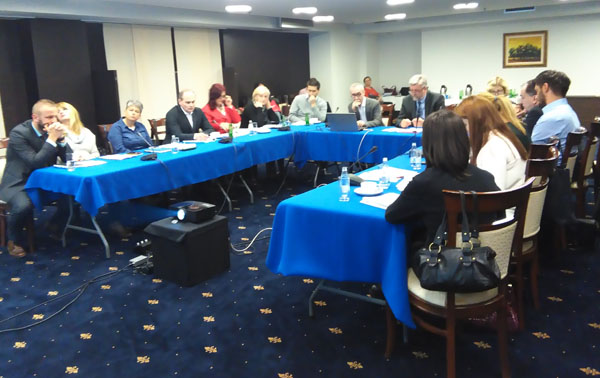 The workshop on preparatory activities regarding draft of the new strategy framework was held on Thursday in the Hotel Europe in Sarajevo, organised by the project team Lucid Linx, under the patronage of the British GGF (Good Governance Fund).

Participants of the workshop were the PAR coordinators of all the levels of authority, Donor representatives (European Union Delegation in BiH, the German GIZ, and the British Embassy), the employees of the Public Administration Reform Coordinator’s Office, and the experts or the project team Suad Musić and Amila Mujčinović.

Dragan Ćuzulan, public administration reform coordinator, stressed the importance of information exchange among the participants regarding preparation of the new strategic framework, and he informed the participants that the PARCO prepared for the Council of Ministers the Information on the activities the PARCO maintains.

Stojanka Ćulibrk, coordinator from the Republic of Srpska informed the participants of the workshop that the Ministry of Administration and Local Self Governance submitted for deliberation to the Government RS the information on future activities in the field of the PAR, while the Brčko District of BiH coordinator said that the Government of the BDBiH might soon also have a session where the information on the coming activities in the field of public administration reform would be discussed.

Suad Musić, expert of the project team spoke of the prepared documents that would serve to the work groups, when they are formed, as work documents for preparation of the new strategic framework. This was an internal analysis of implementation of the Strategy of public administration reform, the Methodology guidelines for implementation of the Operation Plan and the document – Public administration reform in the function of European integrations and economic development.

In the next period, it is expected that the Council of Ministers of BiH, the governments of the entities and of the Brčko District of BiH would appoint the representatives for participation in the work of the work groups, as well as start of their work.