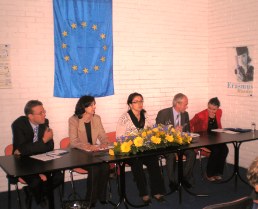 Public Administration Reform in BiH was the topic of the last EU Brunch, held on July the 6th in the EU Info Center of Municipality Old Town Sarajevo. EU Brunch is a monthly meeting with the press, in the framework of the 'Meet the Europe' Project which is being implemented by Directorate for EU Integrations of BiH and Delegation of European Commission in our country.

''Public Administration Reform' is a long – term process, which should move forward with full intensity, after the signing of those documents'' Savic said.

Dirk Lange, Chief of Department for Albania and BiH in the General Directorate of European Commission for enlargement, was also present at the meeting. Lange stressed that the Public Administration Reform is one of the key reforms in the scope of European Partnership, and without it will not be possible to access EU Funds. He made a observation that there is no unified model for this reform which can be taken from other countries.

''EU documents are nowhere quoting the way Public Administration sector should be organized, therefore each country have to find the solution'' Lange said. The reporters were also informed that the RPM (Reform Progress monitoring) in BiH Meeting was held on the previous day, on which was determined evident progress in the area of Public Administration.