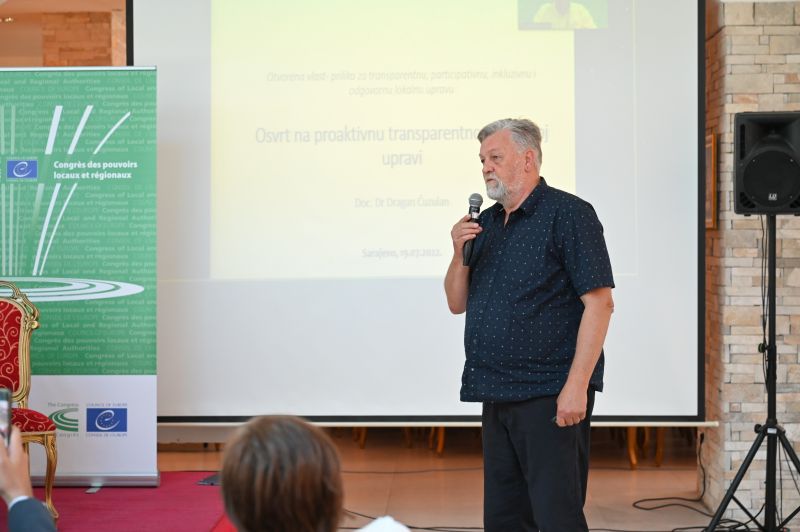 At the forum organized by the Council of Europe in Bijeljina, Dragan Ćuzulan, the coordinator for public administration reform in BiH, spoke on the topic “Innovating democratic participation at the local level in BiH”, regarding transparent and inclusive policies at the local level from the experience of the Advisory Council for Open Government ( OGP), and including activities carried out at the level of BiH.

Dragan Ćuzulan pointed out that during his chairmanship for the Advisory Council of the OGP initiative, together with civil society and institutions from the level of BiH that supported this initiative, he created the first Action Plan that produced certain results. The Council of Ministers of BiH defined the policy and adopted standards of proactive transparency, more specifically a set of 38 data that all institutions at the level of BiH are obliged to publish, and which are of interest to citizens and the business community, the public in general.

He also presented the results of the research that has been carried out since 2019 with an analysis of the state of proactive publication of data on the portals of each institution. Research shows progress in the field of transparency, but also identifies all weaknesses that should be prioritized in the coming period. Out of 81 institutions from the level of BiH, 55 responded to the research questionnaire and the average transparency is 68 percent.

“The set of this information includes internal information of institutions on financial and organizational operations, public procurement, salaries and benefits, employment plans, etc. All this is done with the aim of strengthening public trust in the work of institutions, but also by creating an obligation to inform the public of all information which are of public interest”, said Ćuzulan.

“The key goal of such a portal is to make public administration data available and expand the use of public, open data from one, central place – the portal, which enables private and public sector cooperation. Through the project, a proposal for a legal framework was drawn up – a decision that needs to be adopted by the Council of Ministers of BiH, and where the obligations of institutions to publish open data from their level of competence would be clearly defined,” said Ćuzulan.

One of the measures of the new Strategic Framework and Action Plan for Public Administration Reform refers to the improvement of the law on freedom of access to information at all levels. Laws should prescribe standards of proactive transparency, so that institutions are obliged to publish this information themselves, even when citizens have not asked for it.

“The final result of the implementation of these activities should be the consistent practical application of the right to access to information along with the prescribed and implemented standards of proactive transparency,” Ćuzulan pointed out.