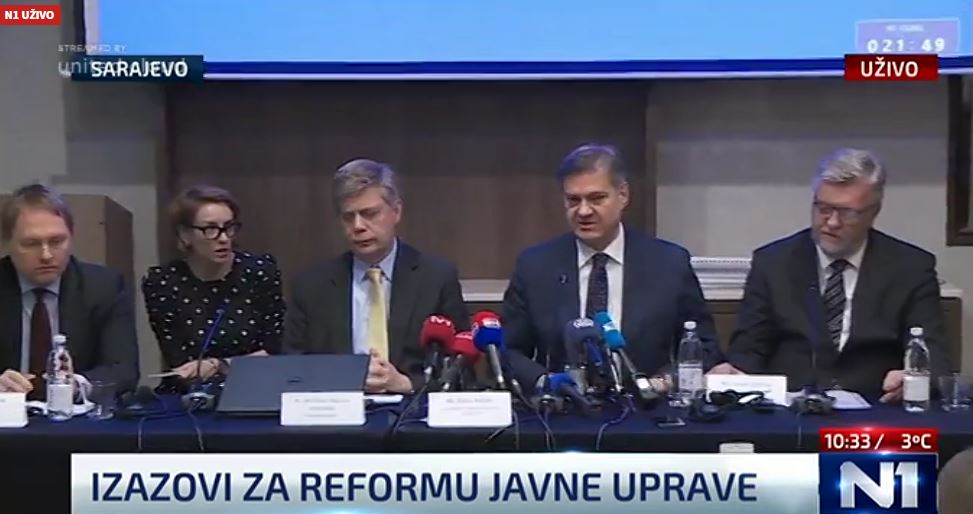 The head of the EU Delegation in BiH, Lars-Gunnar Wigemark, said that the public administration in BiH and the countries of the region was not sufficiently efficient and that the consequences were losses in economy.

“It is a key to have an independent and professional public administration for the countries that are in the accession process, i.e. striving to become EU members, so they could hndle all the complex regulations, rules and standards of the EU”, said Wigemark.

He expressed hope that the political parties in their election campaigns would deal with the matters of public administration, and not only division of functions in the administration.

The chairman of the Council of Ministers, Denis Zvizdić, said that open and transparent public administration, efficient and simple procedures, as well as trained and professional civil servants, are necessary for all the processes in in BiH to be more efficient.

That, according to him, would bring to the overall economic, social, communal and political life the dynamics, and it would enable BiH to adjust to a real EU acquis.

The first is, according to his words, the updated public administration reform strategy, and the other two are the public finance management strategy and the law on civil servants, which should be completed in the next period.

Zvizdić said that a great job has been done in the public administration reform, and he added that he was not satisfied with the overall results, but that he was satisfied with the fact that that there was a change in the “matrix of behaviour of the civil servants, which lasts in BiH for over 20 years, and which until three years ago was almost inefficient”.

The Public Administration reform coordinator of BiH, Dragan Ćuzulan, said that the main challenge for BiH was a lack of data records, so it was not possible to evaluate BiH in some areas.

He invited institutions in BiH to submit, during the next measurement, the relevant data, so the European Commission could have a clearer picture of public administration in the country.

“The findings of the SIGMA and their recommendations have already been put in the updated public administration reform strategy, founded on the principles of good administration”, said Ćuzulan, and added that the next cycle of the reform would modernise the reform in BiH, so it would truly meet the needs of the citizens and the business community in BiH.

The SIGMA expert, Primož Vehar, said that at that day’s presentation of the report on public administration reform in BiH, there would be a discussion on the strategic framework of the public administration, which was not adopted, the European integration and coordination within BiH on that path, on employment in civil service, as well as on transparency of the budget, and public procurements, which should be harmonised with the EU principles. (Source: N1)