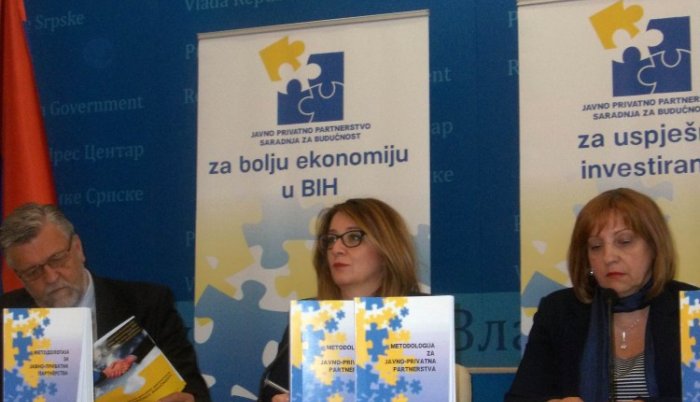 The project of Public Private Partnership, which will be harmonised with the EU standards and the best European practices, is one of the most significant projects and is on the list of priorities of the Public Administration Reform Coordinator’s Office in the area of public finance management.

– We are half way through the implementation of this project, which is being implemented at all the levels of authority – said today in Banja Luka the public administration reform coordinator Dragan Ćuzulan during presentation of the project of public private partnership in BiH.

The period of project implementation, which is expected, as he said, to achieve a lot, is two years.

– The project implementation flow so far is quite satisfactory – pointed out Ćuzulan, saying that this practice existed for quite some time in the European countries, but unfortunately not in BiH, although it represents a chance to solve significant projects both at the local and at other levels of authority.

In the RS, there is a law on public private partnership, as well as at the level of several cantons in the FBiH, but the law itself did not contribute to more significant projects.

– The Government of the Federation of BiH recognised the significance of combining the resources of that BiH entity, which could contribute to more significant investment projects. In that sense, the law on public private partnership was included in the work programme of the Government of the FBiH in this mandate period – Jasmina Pašić, assistant federal minister of energy, industry and mining, pointed out.

Although 10 cantons in the Federation of BiH have individual laws on public private partnership, which include 90 per cent of competences, she added also that the FBiH would adopt their own law, and the bearer of the activity would be the Federal ministry of energy, industry and mining for that level of authority, and that work would include also the representative of the Federal ministry of transport and communication, the Secretariat General of the Government of the FBiH and the project of the public private partnership.

– This project is an ideal opportunity to offer to the Government of the FBiH, in cooperation with the academic community, the text of the law, which would, to the greatest possible extent, protect the public sector, and at the same time would dissuade the private partners to enter a certain arrangement – Pašić pointed out.

Assistant minister of finance of the RS, Radmila Mihić, reminded that since 2009, the law on public private partnership exists in that BiH entity, but that no law was implemented by the existing law.

– The reason for that is that the public sector lacks a quality investment policy, which would give proposals to solve the existing problems through various investments, which could be solved also through public private partnership, loans or in some other way – said Mihić, pointing out that the problem is also “a lack of expert personnel within the public administration, regardless of its cumbersomeness”.

At the same time, she added that the private sector had an expectation that this model would be a quick and direct contracting, which was not a strategic interest.

– Public private partnership is not an ideal solution for everything, or a magic wand, but a serious process in which you cannot reach a quality contract, which would be in force for 20 – 30 years, if you do not dedicate a certain period of time in its preparation – Mihić added.

The basic task of the project is establishment of a functional system for implementation of the projects of public private partnership in Bosnia and Herzegovina in accordance with the European legislation, standards and best practices.

The main project beneficiaries are the governments of the Federation of BiH, the Republic of Srpska and the Brčko District of BiH. The project is financed by the funds of the Public Administration Reform Fund.