Training on Open Government for Civil Servants Held in Sarajevo 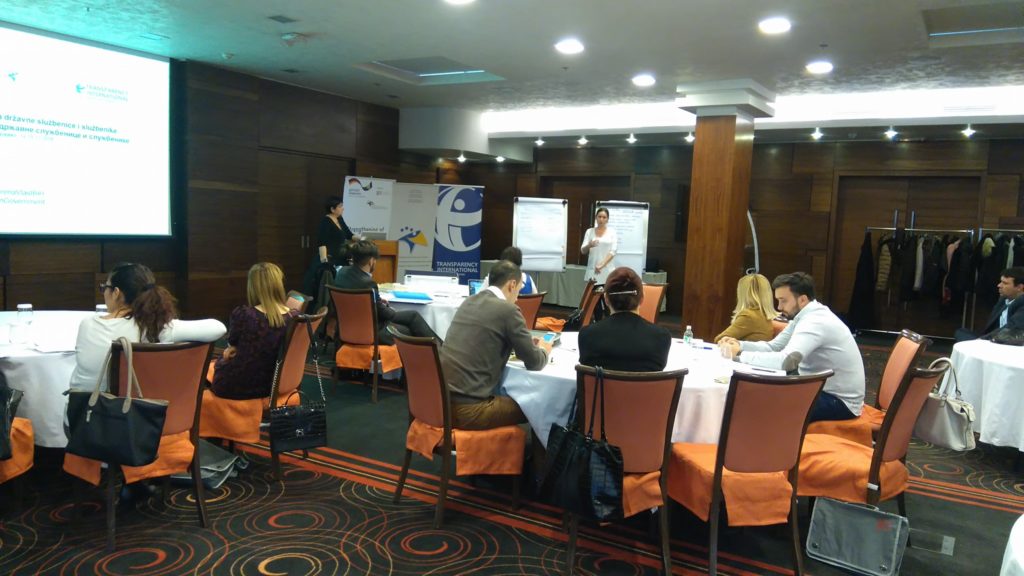 Training on open government for civil servants from institutions at the BiH level Transparent, Accountable, and Open was organised 14-15 December 2016 in Sarajevo within the Programme for Strengthening of Public Institutions in BiH, which is implemented by GIZ on behalf of the German Government. The training was implemented in cooperation of GIZ, Public Administration Reform Coordinator’s Office, Ministry of Justice of BiH, and Transparency International BiH.

With this training the Government of FR Germany through the Programme for Strengthening of Public Institutions in BiH contributes to the development and improvement of capacities of civil servants in the field of open government. The training is designed for the civil servants in the public bodies at the level of BiH, primarily those who have responsibilities and tasks related to cooperation with civil society, communication with the public, implementation of the Freedom of Access to Information Law, public consultations, IT and other areas related to the concept of open government. Programme of the two-day training was focused on topics such as right to information, proactive and fiscal transparency and use of information technologies in open and transparent work of public institutions. The goal of the training was to present the basic principles of the open government concept to all participants in order for them to be able to recognize the ways in which this concept could be applied in their everyday work and to define the main challenges in implementation of the openness principles as well as proposed possible solutions that would improve the existing practices.

The training was organised as one of the measures within the Programme for Strengthening of Public Institutions in BiH aimed at providing support to institutions in application of the open government principles. For this purpose German GIZ established cooperation with Transparency International BiH which provided expertise in this area and presented to the participants basic principles of open government.

Ministry of Justice of BiH and Public Administration Reform Coordinator’s Office – as two institutions involved in the implementation of the Open Government Partnership initiative in BiH – shared their experiences and knowledge in this area.

During the introductory part of the training the participants were addressed by Nedžad Salman, Assistant Minister of Justice BiH, Vedrana Faladžić, Senior Expert Associate in PARCO, Elvira Mujkić, Project Coordinator in TI BiH, and Elvis Mujanović, Adviser in GIZ.

First day of the training following presentations were held:

During the second day of the training the participants had the opportunity to choose specific exercises offered within the three areas (transparency, openness, and accountability) and thus deepen their insights on these concepts as well as to attempt to apply them to the work of their institutions.