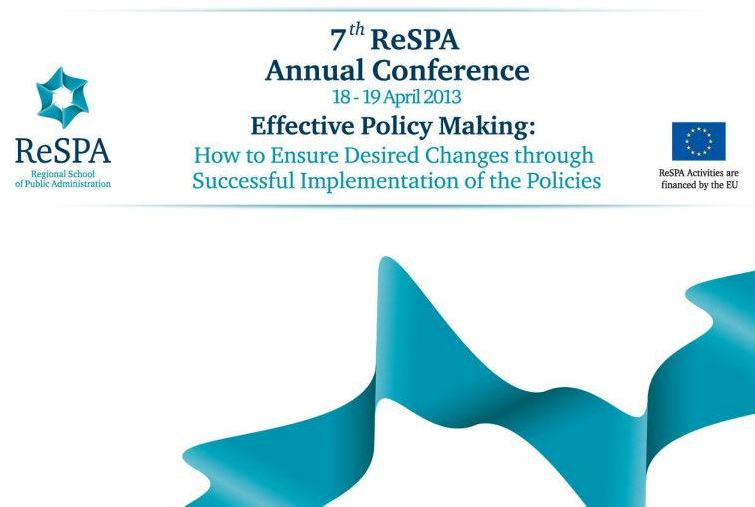 The conference “Effective Policy Making: How to Ensure Desired Changes through Successful Implementation of the Policies”, in organization of the Regional School for Public Administration (ReSPA), has been held on the April 18 and 19 in Danilovgrad, Montenegro. This was a regular annual conference, seventh in a row, organized by ReSPA, with the purpose of promotion and exchange of experiences between representatives of member states and networking with experts from the European Union. During the two days of the conference, experts and specialists from more than 20 countries provided their expertise and shared their country's experience on issues related to the main theme of the conference.

The topic of this year's conference was chosen since policy making is one of the fundamental phases of the policy cycle and because of the great need for policy making to improve in all its cycles, especially in the momentum of problem and priorities identification and formulation, followed with adequate set up of the indicators for policy Monitoring and Evaluation.  The conference program has offered professional presentations, in-depth analysis, comparative findings, and discussions, provided by civil service professionals from the Western Balkans, EU, and EU institutions, World Bank, SIGMA and renowned university professors.

A round table was also conducted and it gathered policy makers, decision makers, NGOs and EU into a panel that highlighted the importance of the policy making towards the civil society, its openness and transparency and participation of all interested parties.

In a frame of the third theme participants have also been representatives of the Public Administration Reform Coordinator's Office (PARCO), by presenting the monitoring and evaluation system for monitoring the progress in implementation of the public administration reform in Bosnia and Herzegovina, developed by PARCO.

Explained has been the role of monitoring in a complex policy such as the public administration reform and in a complex multi-level environment present in the administration arrangement of BiH. The emphasis was on the policy audit through revision of the Action Plan 1 of the PAR Strategy, as well as the M&E audit that followed it. Presented have been experiences of PARCO with developing monitoring indicators and noticed advantages and disadvantages of quantitative and qualitative approach in monitoring progress and implementation of the RAP1 of the PAR Strategy.

In addition, in presentation of the World Bank representatives, on the project of M&E capacity building in public administrations of Western Balkans and Turkey, presented have been preliminary results of the research conducted in the inception project phase. Some of the findings have been related to the so called “Readiness Indicators” of public administrations of mentioned countries, in a sense of possessing certain components required for the total introduction of the M&E concept.  According to presented results, Bosnia and Herzegovina is surely on top by the existing capacities for M&E implementation developed, with only one lack – lack of total evaluation and planned usage of M&E findings by governments, while all other elements (strategic framework, performance indicators, M&E system, human resources) are on a far higher level, when comparing those with other Western Balkans countries.

The conference has been attended by over 80 participants from the Public Administration and civil society; members of Parliaments, international organizations, embassies, experts form the EU and non EU countries, which gave this conference an international character.

As representatives of Bosnia and Herzegovina, besides the PARCO, the conference has also been attended by representatives of Ministry of Justice of BiH, General Secretariat of the Council of Ministers of BiH, General Secretariat of the Government of the Federation of BiH, Directorate for Economic Planning of the FBiH, Ministry of governance and local self-governance of the Republic of Srpska and Civil Administration Agency of the RS.