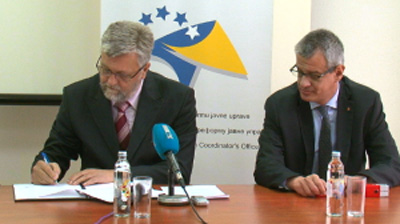 Objective of the project “Public Private Partnership” is establishment of the functional systems of the PPP in BiH in accordance with the European legislation, standards and best practices. Public private partnership enables financing of the big public investments in part by private funds. The project will create legal assumptions for PPP at the levels where those preconditions still do not exist. Since BiH aspires to join the EU, all legal solutions, the existing ones and the future ones will be harmonised with the EU legislation. In order to test the success of the project, it was foreseen to design and implement 2 pilot PPP projects (one in the FBiH, the other in the RS) to the extent possible, Ćuzulan pointed out.

He added that implementation of the project would consist of three 3 components: development of the legal framework for PPP, building of capacities and engagement of the private sector and promotion campaign, and that the main beneficiaries of the project are: the Ministry of Finance of the RS, the Ministry of Finance of the FBiH, the Directorate for Finance of the Brčko District, the Ministry of Transport and Communication of the FBiH, the Directorate for European Integration, the Commissions for Concessions of BiH, the FBiH and the RS, and the Commission for Public Private Partnership of the BD. As the indirect beneficiaries, he mentioned the ministries of trade at all the levels, the Agency for Promotion of Foreign Investments and others.

The project would cover three administration levels: the FBiH, the RS and the BD, duration of the project is 18 months, and the total value of the project BAM 2,877,059.25 with the VAT.

Ćuzulan said that the project “Strengthening Capacities for Strategic Planning and Policy Development – Phase II (SPPD II)” has the objective of further development of functional and sustainable evidence based systems of strategic planning related with budget planning and public policy development, at the level of the state, the entities and the Brčko District, which promote effectiveness, efficiency, accountability and support to the EU integration process. Through implementation of this project, building of capacities for ministries’ public policy development will be based on methodology recommended by the OECD / SIGMA and the EU. That methodology enabled the civil servants to have the possibility to define for the first time the problem with the focus on early consultations with the key actors, public policy option impact assessment, and monitoring and implementation assessment.

The project will be implemented at all four administration levels (the level of the CoM BiH, the FBiH, the RS and the BD BiH), and the period of implementation of the project is 30 months.

The projects will be financed from the Public Administration Reform Fund.