“Training of civil servants for application of information technologies” 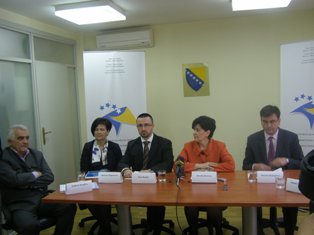 At a media conference held today in the Public Administration Reform Coordinator’s Office on the occasion of the start of implementation of the project “Training of Civil Servants for application of information technologies and work on computers”, implementation of IT training for 1600 civil servants from the level of institutions of BiH, the FBiH, the Republic of Srpska and the Brčko District was announced.

“The project will contribute to more quality capability of civil servants in the civil service bodies, at all four administrative levels, for practical application of knowledge in the field of information technologies in daily work and increase in the general level of computer literacy in the civil service. In the long term, such administration will be able to provide quality service to the citizens, the clients from the business sector as well to the other users of administrative services”, said Semiha Borovac, the Public Administration Reform in BiH Coordinator.

“We are pleased that together with 4 more companies from the whole BIH we participate in the largest so far IT training project initiated in our country. We believe that acceptance of European and world standards is the best way that our country rapidly passes through a transition time and quickly become involved in European integration. Training by the ECDL standard, as the standard for computer literacy, which was recommended and strongly supported by the European Commission, we see as our contribution and a small step in that direction”, said Amir Mulalić, director of the Centre for Computer Education CCED from Sarajevo.