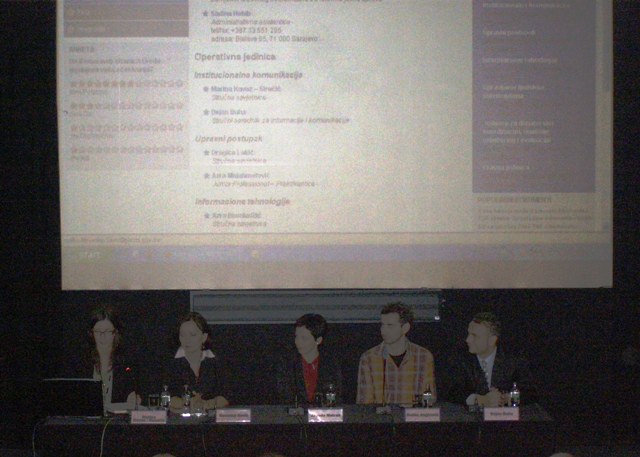 In her introductory address, Ms. Nevenka Savić, BiH State Public Administration Reform Coordinator, informed the attendees on the activities of the Office on the promotion of the reform and the project which resulted in the redesigned web site.Mr Andrew McBride welcomed the attendees in the name of the sponsors of the project – the Department for International Development of the Government of the Great Britain (DfID) and the National School of Governance (NSG). He expressed the expectations that the new website would increase the visibility of the public administration reform and the results of the Coordinator’s Office. Ms. Jagoda Matrak, executive director of the PRIME Communications from Banja Luka, the contractor of the project, also expressed her satisfaction with cooperation and the final result of the redesign project.

Redesigned website of the Office is intended for everyone; the partners in the implementation of the reform, as well as for the wider public. In creating the contents and during a development of the design, one step further was taken from the user site which presents only the work of the institution; it also has data exchange system. The website of the Coordinator’s Office offers the possibility of electronic communication with civil servants/partners involved in the public administration reform, in the sense of download of work materials in electronic form.

www.parco.gov.ba is one of only 20 web sites of state institutions, which have contents in all the languages and alphabets of the constituent nations of BiH, as well as in English language.

What makes the website of the Public Administration Reform Coordinator’s Office different from most of the other sites of the state institutions is the fact that employees of the Office administer the site and they do it every day. Together with modern graphic and design solutions, and easier navigation and comprehensive base of information from all the areas of public administration reform in BiH, besides standard options, the site offers to users the following contents as well:

The objective is that contents of the website in one place will offer all the information on the public administration reform, and that implemented changes will motivate the bodies which do not have their website or are redesigning it to openly communicate with the public.