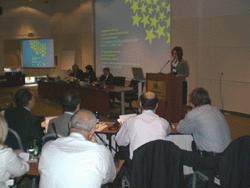 Second Regional Workshop on the Reform of the Structures of the Public Administration in the Western Balkans was held on October 11 and 12, 2007 in Budva, Montenegro. Workshop was organized by the Administration for Human Resources of the Republic of Montenegro, together with the Office of the UNDP in Montenegro. Organization of the gathering was implemented with the support of the UNDP Regional Office from Bratislava and with the participation of the newly formed Community of Practitioners in the area of human resource management in the structures of the civil service in the Western Balkans.

The event gathered the representatives of the structures of the civil services from the region, representatives of the international community, academic and NGO sector. The main objective of the workshop was insurance of the forum for discussion for civil servants and others involved in the process of public administration reform in Western Balkans. They would discuss on the professionalizing and political independence in the civil service.

Association of the Community of Practitioners, gathering individuals working in the structures of the civil services in the region, but also everybody else interested in the exchange of information, knowledge, experiences and lessons learned in the area of human resource management in the domain of the public administration, was officially presented at the workshop.